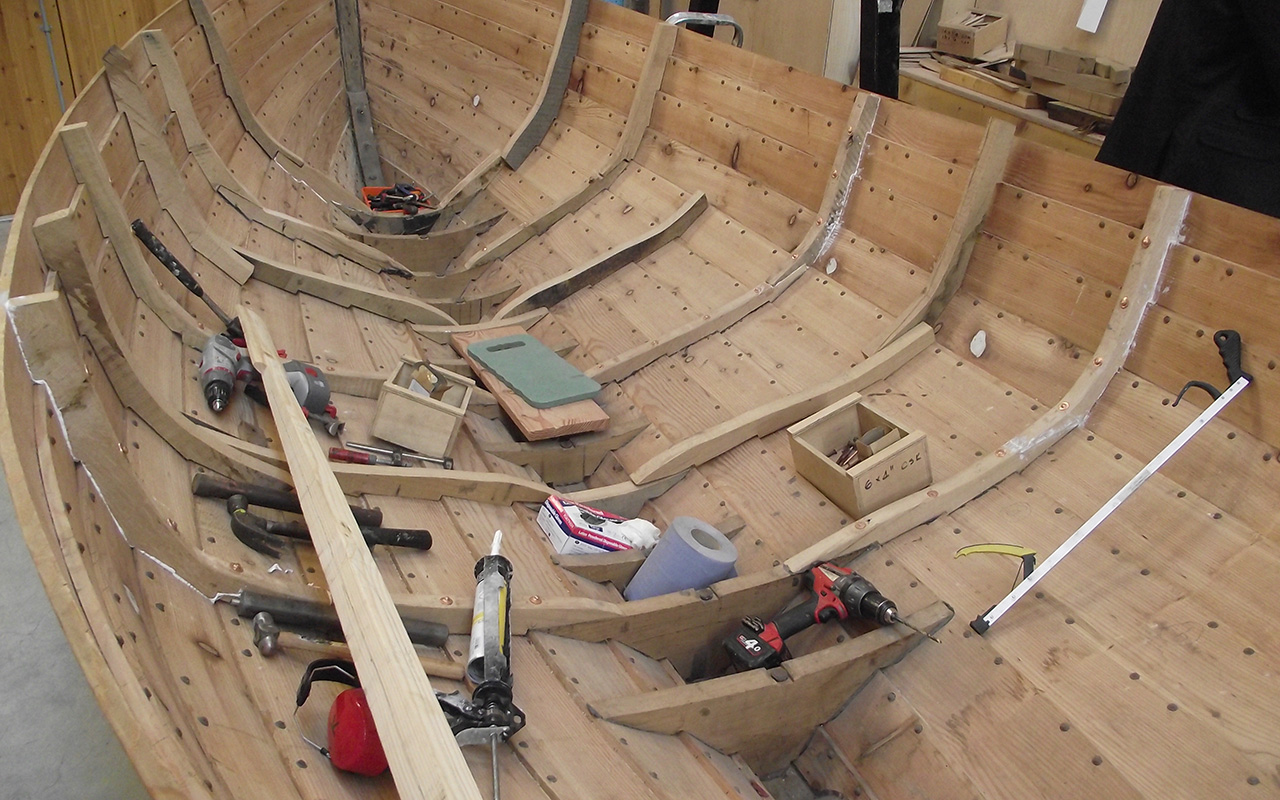 The town of Portsoy in North-east Scotland is buzzing with excitement for the much anticipated return of the Aberdeen Asset Management Scottish Traditional Boat Festival on 22and 23 June 2013, but long after the crowds have disappeared the Portsoy Boatshed’s project hopes to leave its mark on the area for generations to come.

Portsoy Boatshed was established by a group of volunteers including James Crombie, Pete Danks and Lorna Summers in 2005 with a view to preserving traditional boat building craft skills whilst also engaging young people with the important maritime heritage of the area. The project has since gone from strength to strength and shows no signs of slowing down.

James, Pete and their small team of volunteers initially set about teaching children the art of traditional boat building skills by launching the Faering Project. This focused on the Norwegian Faering, or ‘four oar’ boat as it is otherwise known – a boat with a simple design which is straight forward for youngsters to build, and which is the ancestor of our local types. The children who ventured on the first project have grown up with it and now, as teenagers, are involved in building much more complex designs.

James attributes the success of the Boatshed largely to the volunteers. He adds, “We established this project eight years ago, and the success we have seen over the years has been unbelievable. We have a fantastic team of volunteers who work tirelessly to support the project and who will do anything for it.

“A major turning point for Portsoy Boatshed arrived when we were gifted the Boatshed building – a derelict harbourside building from which all training and restoration activities can take place – from the Portsoy Maritime Heritage Society. This development will allow us to expand our efforts and will mean that we can begin working on different types of boats, including the Optimist Dinghy, which is the world’s most popular children’s dinghy.

“The Boatshed will give us a spacious workshop which allows training and restoration to be undertaken in full view of the public. The renovation of the Boatshed is a £420,000 project funded by Aberdeenshire Council, CARS (a collaboration between Aberdeenshire council and Historic Scotland) and AEFF Axis 4 funding and will take place over the coming year.

“Also the architects Brown + Brown are generously donating their professional services as they are so supportive of our aims”.

As well as providing an outlet for training and restoration, James hopes that the development of the Boatshed will move the project forward to become an attraction for visitors to the area. He adds, “The Boatshed is one of the few of its kind in Scotland, and we hope that this will become a must-see attraction for tourists to the area. There is a real emphasis nowadays on tradition and local heritage, and I believe that visitors will be keen to learn about the traditional craft skills of our forefathers, as well as learning a few new skills along the way. These activities are a wonderful vehicle for teaching the skills needed in life for the 21st century”.

Whilst the project was launched to educate young people on traditional craft skills, but in addition to craft skills, participants also learn basic geometry, interpersonal skills and teamwork.

The training programme takes participants from the initial stages of boat building right through to learning to sail the boats they have helped to create. James comments, “It is a real added bonus that our course participants are able to see all of their hard work come to fruition. Learning to sail – and eventually sailing the boats that they have put hard work into – that’s something really special.”

In order to advance the project, The Boatshed bought a kit to build a St Ayles skiff – a traditional small boat. The skiff kit was purchased with the intention of teaching youngsters to build skiffs, however, in the end it was their mothers and grandmothers who took up the challenge.  Following a visit to the Festival by the Scottish Coastal Rowing Project in 2011, a group of Portsoy ‘quines’ decided to learn the craft skills required to build a traditional skiff and based themselves at the Boatshed. This led the ladies to establish a rowing team called the Portsoy Skiffettes on their own handmade boat, ‘Soy Quine’.

The team is on the brink of an ambitious project – they plan to build a full sized replica coble salmon fishing boat which is a completely different design to the other craft they have created to date. Whilst it is still a traditional boat, the coble is a much more sophisticated design and is more technically demanding to build.

Since its humble beginnings eight years ago, the Boatshed has become an integral part of the Portsoy harbour and the Aberdeen Asset Management Scottish Traditional Boat Festival. Founded in 1993 as a community event to commemorate the 300th anniversary of the creation of the harbour, the Festival now puts a special emphasis on the preservation of craft skills, boat building, restoration and sailing, and on associated authentic skills such as knitting, weaving and embroidery.